What is Proof of Stake (PoS)?

By reading the article “What is Proof of Stake Mechanism in Cryptocurrency and blockchain” published in Adaas Investment Magazine, you will get acquainted with PoS Consensus Mechanism and its usages in general. This level of familiarity can be enough when you need educational information about this topic.

A Review of Proof of Stake Algorithm

To understand the Proof of Stake algorithm in some networks, you should know that in some cryptocurrency networks, this method is used instead of proof of work to confirm transactions.

What does the Consensus term mean?

Before examining the proof of stake mechanism, you should be familiar with the meaning of the term “consensus” in the blockchain. Consensus means the agreement of the members of a decentralized network to approve transactions and register blocks in the blockchain.

As you have read, this mechanism is a kind of consensus mechanism in decentralized networks based on Blockchain technology. In this algorithm, the validation deposit, which is a token of the same network, is used to validate transactions and verify blocks for registration in the blockchain.

In the proof of stake algorithms, network validators prepare themselves for random transaction validation operations. They do so by depositing their network tokens (for example, for the Ethereum network ETH tokens must be deposited) in the shared network. (in more commonly Staking the tokens) 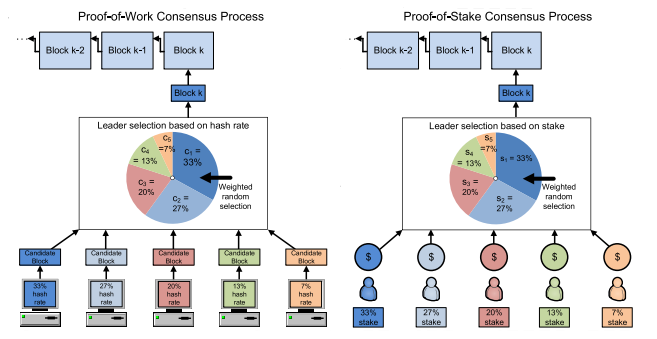 Confirm the transaction and receive rewards in the PoS mechanism

The ratio of receiving rewards for transaction validation operations is directly related to the number of tokens which is deposited by validators in decentralized networks staking pools. This means receiving more rewards for larger depositors.

Thus, the number of locked tokens in the network increases, and this can be a reason for to increase in the price of tokens due to the decrease in supply. This is because the selection of the validator is done according to a random algorithm and with the increase of deposited tokens, the chance of receiving the transaction confirmation operation for the validator increases. 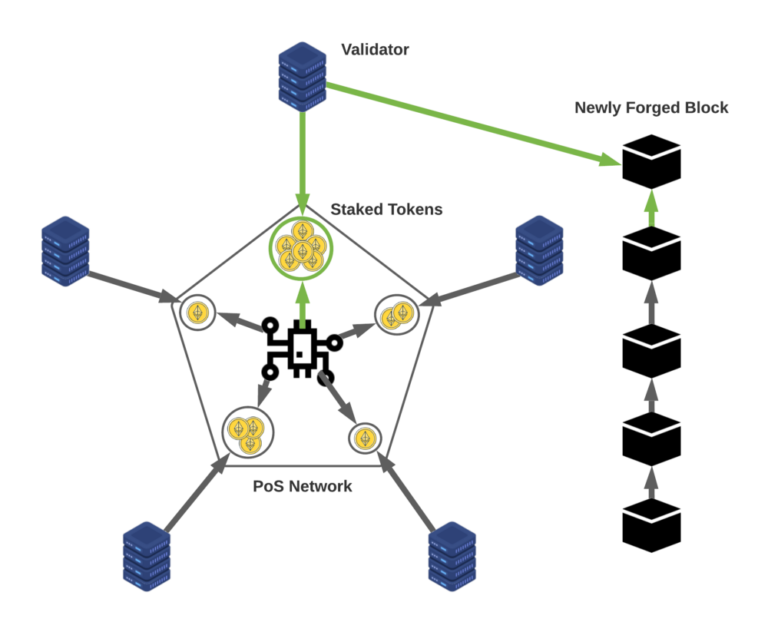 Provide security in blockchains based on proof of stake

Increasing the number of network tokens in deposits to receive more rewards increases network security. In contrast, in blockchains that use the proof-of-work mechanism, network security is measured by the hash rate, which indicates the hardness of the network.

To attack this network, if it dominates 51% of the network hash rate, the ability to register incorrect information is provided. But in networks that use the PoS consensus mechanism, the attack must cry out a large portion of all the tokens in a network.
By deterrents such as supply and demand or Price Impact, it may be theoretically feasible, but in terms of the operation, such an attack is far from mind-blowing.

Decentralization in Proof of Stake algorithm

The main goal of blockchain innovation is to decentralize processes. Networks that use this consensus mechanism experience more decentralization than networks with a proof-of-work mechanism.

Because to increase the network validators, it is enough to deposit the purchased tokens on a platform with a few simple clicks, and this process is much simpler than the confirmation process in the transaction in the proof-of-work algorithm.

The benefits of the PoS mechanism

Challenges of Proof of Stake algorithm:

After the introduction and implementation of this consensus mechanism, a group of critics has examined and expressed the challenges of this algorithm. Including the injustice of getting a chance to approve a transaction and the rewards of block registration, which people have argued that in the consensus mechanism, the rich can get the energy they need to process the network cheaper than ordinary people and the poor nineties. The final reward for them is calculated more than for other people.

They also state the possibility of a Long-Range Attack, which is a kind of attack with the help of the first block of a blockchain and the branch originating from it. Experts express a lot of technical opinions to solve these challenges, which we have refrained from examining in this tutorial.

Cardano is a cryptocurrency which is providing a platform for smart contracts and decentralized applications with a focus on scalability.

EOS is a cryptocurrency which is created to provide a platform for smart contracts and decentralized applications development.

Cosmos is a cryptocurrency that is created with the aim of connecting different blockchains together.

At Adaas Capital, we hope that by reading this article you will be fully immersed in the Proof of Stake consensus mechanism in cryptocurrency and blockchain. You can help us improve by sharing the article “What is Proof of Stake Mechanism in Cryptocurrency and blockchain” published in Adaas Investment Magazine and help optimize this article by submitting your comments.

What does the Consensus term mean?

Consensus means the agreement of the members of a decentralized network to approve transactions and register blocks in the blockchain.

What is Proof Of Stake?

In this algorithm, the validation deposit, which is a token of the same network, is used to validate transactions and verify blocks for registration in the blockchain.